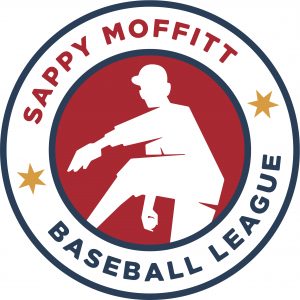 The Sappy Moffitt Baseball League (SMBL) arose out of a question posed between two friends back in the Spring of 2013:

Why did we stop playing baseball?

From that question emerged two lists of names – possible players for a game – on a beverage napkin. Phone calls followed. Wait, an actual baseball game? Not softball, or whiffle ball, or a game of catch? A friend invited a neighbor, a neighbor invited a colleague. The response was enthusiastic and enough players were secured to field two teams – the Monroe Park Millracers and South Shore Liners – for a game that summer.

The joy of playing baseball again, which for some players had been 20+ years, was contagious. More people who heard about it wanted a chance to play, and another team was formed. And then another. That first baseball game grew into a league of 10 teams, now in its 9th season.

The SMBL takes its name after the early 1900s South Bend Greenstockings’ legendary pitcher, Elmer “Sappy” Moffitt, though it’s not so much a league as it is a civic club. Members come from various pockets of town and numerous walks of life to participate. A judge pitches to a fireman while a high school teacher simultaneously serves as catcher and umpire. A farmer fields a ball and tosses it to an architect covering second base. A priest flies out to a car salesman in left. It’s about community, this community, and the teams celebrate the game as much as they do the history of South Bend written across their jerseys. The Studebaker Larks take the field against the Battell Ironhides, Lowell Porters line up against this year’s newest team, the Oliver Chill.

With each new team that joins the league, and each new relationship forged, that original question grows more profound: Why did we ever stop playing baseball?