SOUTH BEND (AP) – – The people came.  Baseball was played.  Pain was eased.  More than a century has passed since the digging of the Mill Race brought manufacturing jobs to South Bend, and the town thrived with scores of workers commuting by South Shore Line to pursue their dreams in northern Indiana.  But the economy turned and Studebaker drove off, taking with it workers and their families looking for new opportunities.  This past Saturday, the people returned.  It wasn’t the promise of employment or the dream of a white picket fence.  These things are fleeting.  Rather, it was the one constant in American life that brought them back to the Bend.  Yes, it was baseball.

The rain held off, cobwebs were brushed aside, and Nike Landsharks from JV football were laced up as the Mill Racers and South Shore Liners took the field.  Liner 1B John Pinter showed his veteran resourcefulness in getting the teams out of their first pickle of the day, using one of the 85 keys on his key ring to unlock the press box and find the bases.  The pregame excitement continued with the trade of Dan Baker to the Racers minutes before the opening pitch.  Fired up over being the first player in Indiana history to be traded for a jersey, the right fielder quickly got his revenge with the day’s top web gem, a diving catch to thwart the Liners’ early rally.

The Racers jumped out to a quick lead as Hunter-Bowman pulled a 2-2 fastball down the left field line in the 1st.  It was an impressive swing, but not nearly as impressive as his later feat – playing catcher in the late innings without a cup.  “That takes some cojones,” commented Coach Insley, “which is pretty much the reason to wear a cup.”  The Liners responded in the bottom of the inning, with JP Shortall’s hustle earning him a game ball for sacrificing his right hamstring and tearing his pants to score the Liners ever important first run.  When asked if the injury was going to set him back for the work week, Shortall replied, “Dude, you serious?  Salsa is all in the hips.”  The Racers responded and quickly added to their lead, led by speedy CF and leadoff hitter, Ronnie Henderson (hits like Belliard, runs like Ricky), who uses a bit more than his hips during the week operating a fork lift at the local manufacturing plant.

Dan Castillo, the 6’5″ lefty, started for the Racers and proved to be the game’s most intimidating player.  His prowess led to Liners swinging at un-catchable 3rd strikes and running safely to 1st base—an American schoolyard tactic that caught the Cuban defector off guard and moved the Liners ahead, 5-3.  It also led to Dan brushing his teeth with his right arm for the month of July.  One Liner the lefty did not intimidate was 2B Mike Griffin.  Griff, a career .264 hitter in high school, wore a jersey a size too small just so he could represent his boyhood hero, #51, Willie McGee.  With his boys watching in Cardinals hats, Griff’s flawless scooping of grounders was less reminiscent of Willie and more like that of the Wizard.  Another Liner sporting his NL Central squad was latecomer JP Lichon.  Like a true Chicago Cub, he showed up 10 minutes after the scheduled HGH testing concluded and promptly smacked a deep fly to the warning track.  Hmm…

Cub rival and former Milwaukee Brewer, Steve Sollmann, hung up his cleats a couple years back to be with his wife and see his kids grow up.  Walking from their house a block down from Boehm Park, his family watched Dad stay young, barehanding a hopper up the middle to rob the Racers of a base hit in the 3rd.  Steve’s counterpart, Christian Snavely, was drafted by the Toronto Blue Jays, which is fitting, for the foul ball homerun that he launched in the top of the 6th landed deep into the Ontario province, if it landed at all.  As if forgetting to bring his hat to the game was a big enough rookie mistake, reliever Zack Riffle, the game’s youngest player, served Snavely the four-seamer that provided the game’s biggest non-hit.  But Riffle responded like a veteran in changing speeds and getting the Racer slugger to ground out to second.  The right-handed was equally matched by the opposing reliever, Sean Kennedy, throwing sidewinder Oakland A’s style to suppress the Liners’ offensive surge.  Pitching to his fellow Boston College battery mate in the land of the Golden Dome, Kennedy later remarked, “You know, it is what it is, [we’re] beyond the whole rivalry thing.  But hey, do you remember that epic field goal in ’93?”

All kinds of barriers were broken Saturday.  Regan McGann braved the testosterone laden clubhouse and made her way to right field for the visiting team.  With eye-black on her cheeks and fire in her nostrils, Regan brought the crowd to their feet as she cracked a sharp liner up the middle that resulted in two bags.  Regan’s breakthrough paved the way for the Liner’s first female player, Raquel Falk.  “The only diamond for me,” Raquel remarked during pregame warmups, “is one with base paths on it.”  In addition to gender lines being crossed, the religious divide was bridged as Mennonites and Catholics poured into the park.  Racer SS and Kern Road churchgoer, Andrew Tucker, was seen exchanging his glove with the Catholic Liner 3B, Josh Noem, in between innings.  Both made stellar defensive plays which they attributed to the shared glove.  “Listen,” said a nonchalant Tucker, “the media wants to make a big deal out of it.  Symbol or Real presence?  Dawg, I’m a ballplayer not a magician.”  To which Noem wryly replied, “Yeah, you know, I put my jock on just like Tucker, one leg at a time…  Except, once my jock is on, I win games 8-3.”

Amazingly, an inning later the Liners had a chance to increase their lead to exactly that score, 8-3, with runners in scoring position and RF Lenny Delorenzo up to bat.  After spending the offseason repeatedly telling his reluctant 7 year-old to keep his front foot in the box, Delorenzo took matters into his own hands and modeled a Wade Boggs-worthy opposite field double for insurance runs for the Liners and a convincing lesson for Junior.  Bert Fitzgerald’s dad impersonated famous baseball moments for young Bert, and so desperate for a comeback, the Racer 2B figured his best shot would be to lather up his bat barrel with pine tar, deliver a farewell speech, limp to the plate, point down the right field line, place a bet on his team, and swing for the fences.  Three mighty winds swept through the field and when the crowd recovered Shaun Warkentin was in the batter’s box.  Still confused by Bert’s plate appearance, the Liners were caught off guard by the game’s lone farmer.  Like broccoli growing in the dead of winter, a surprise bunt was perfectly laid down the 3rd base line to start a Racer rally in the 7th.   When asked after the game about the unconventional play, Warkentin leaned against his big orange van and replied, “What’d you expect bro?  Organic is how I roll.”  With a runner on first, the Racers were poised to rally. But the fatigue from not having played in 20 years set in, and a lazy fly ball ended the game.

Defensive honors went to the two catchers, Ryan Dainty and Matthew Insley.  Upon the game’s conclusion, Dainty promptly gave the game ball to his mom, who traveled up from Tennessee just to deliver her baby boy’s high school catcher’s gear.  Not only did Dainty call every pitch/location for the Liner throwers, he also umpired and threatened to throw himself out after a questionable ball four.  Insley gained his players’ trust in their coach as he put his neck on the line, literally, taking a wild split-finger fastball in the throat to prevent a runner from advancing to second in the bottom of the 6th.  When asked about the play afterwards, he had no comment.

The players exchanged handshakes, a photograph was taken, the crowd bought hotdogs for the road, and the rain clouds converged over the field.  A young girl helped carry her father’s glove to the car and asked, “Papa, do you think someday I can play?”  The time was 3:48pm, and across town the South Shore Line was pulling into the station.

Copyright by STATS LLC and The Associated Press 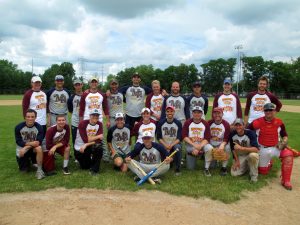 The Millracers and Liners pose after the first Sappy Moffitt League game ever played.